6 Day Tour in Transylvania and Bucovina

Discover Romania’s Transylvania and Bucovina regions on a tour that spans six full days of sightseeing. You’ll encounter some of the most unspoiled regions in Eastern Europe. Highlights include Bran Castle (Dracula’s Castle), the historical city of Brasov, and the UNESCO-listed Painted Monasteries of Bucovina.

Avoid searching for hotels with 4-star accommodations booked in advance, which is included in the tour.

Stop At: Curtea de Arges Monastery, one of the most important faith centers of Romania, which we will explore to find out it’s history.

Stop At: Sibiu the most important cultural centers in Romania. This amazing medieval city was one of the largest and wealthiest strongholds in Europe and nowadays it is a city of art and culture that has the power to fascinate. Walking in the old center will reveal such places as The Big Square, The Liars Bridge, The Bukenthal Palace and The Clock Tower.

No meals included on this day.
Accommodation included at 4* hotel.

Stop At: Citadel of Alba Iulia, the city where the unification of Romania was signed. Explore the roman and medieval streets to find out the culture and history of this city.

Stop At: Turda Salt Mine, which is probably one of the most important and interesting places to see in Transylvania. According to the top of the most spectacular sights to see out there made by the site businessinsider.com, Turda Salt Mine is situated on the 22th place. Salina Turda, located in Turda, Romania, is home to an underground theme park that’s nestled inside one of the oldest salt mines in the world. The salt mine, which dates as far back as the 17th century, was used for everything from a cheese storage center to a bomb shelter in WWII.

Stop At: Sighisoara Historic Center. Walk inside the old walls of this fairy tale town to find out the history of Dracula and Sighisoara, one of the emblematic city for Transylvanian culture.

After lunch head for Gura Humorului, in Bucovina region where you will be accommodated.

Stop At: Voronet Monastery. You don’t have to be very religious to enjoy a visit to Voronet Monastery where you’ll see the most famous of the painted churches of Bucovina. Included today on the UNESCO World Heritage. This religious monument is a unique symbol of how local medieval princes emphasized their great support for the Orthodox faith in a time when its existence was threatened by the expansion of the Ottoman Empire.

Stop At: Moldovita Monastery – one of the eight painted churches included on UNESCO World Heritage Sites, all masterpieces inspired by the Byzantine art of the 15th and 16th centuries. Their distinctive element – the external walls covered with frescoes representing complete religious cycles – makes them unique in the myriad of churches built anywhere in the world in that time.

Stop At: Sucevita Monastery – a masterpiece and ‘a testament of Moldavian art’, Sucevita Monastery marks the end of an era, a time in which medieval religious art reached new levels of innovation and creativity in this part of Romania.

Stop At: Marginea Black Pottery Workshop – the only place in Europe and the second in the world where black pottery is produced. This place is one of the most famous pottery centers in Romania. Its craftsmen manufacture black ceramics according to traditions and techniques carried on from one generation to another.

Stop At: Bicaz Gorges, which are famous for their limestone rocks towering over narrow roads and passes. The road that slices through the Bicaz Gorges (Cheile Bicazului) is among Romania’s most stunning and spectacular.

Stop At: Red Lake, The Red Lake is the largest barrier lake in the Eastern Carpathian Mountains, and it is located near the Bicaz Gorges. It is also known as “the Killer Lake”, partly because of the reddish, blood-like color lent by the sediments carried, and partly due to a horrific legend.

Stop At: Brasov Historical Center. We will take a short tour of the old town. You will be able to visit Black Church, the Council Square and to enjoy the lovely atmosphere of this charming city!

Stop At: Bran Castle, also called Dracula’s Castle, it is situated in Bran village. A remarkable architecture with Gothic elements, the castle was built between 1377-1382, at 60 m high. Built originally as a fortress surrounded by a massive wall with small windows which were used to shoot the enemies, Bran Castle proved to be a successful defense point. In the inner courtyard of the castle is a fountain used to provide water in case of siege. Bran Castle got its fame from the novel Dracula, written by Bram Stoker and Dracula movie.

Stop At: Peles Castle – the former royal residence, an architectural jewel. Nowadays the Castle is one of the most important museums in Transylvania where one can admire furniture and ornamental objects, carpets, tapestry, sculptures, paintings, collections of weapons from the 15th up to the19th centuries.

Assistance during the entire tour in English

– Confirmation will be received at time of booking

– We pick up also from apartments. Please indicate the address and we will contact you the day before the tour starts to let you know the closest pick-up point if we can’t pick you up from your address. In any case it will not be further than 500-600 m.

– The duration of the tour is approximate, the exact duration will depend on the time of day and traffic conditions 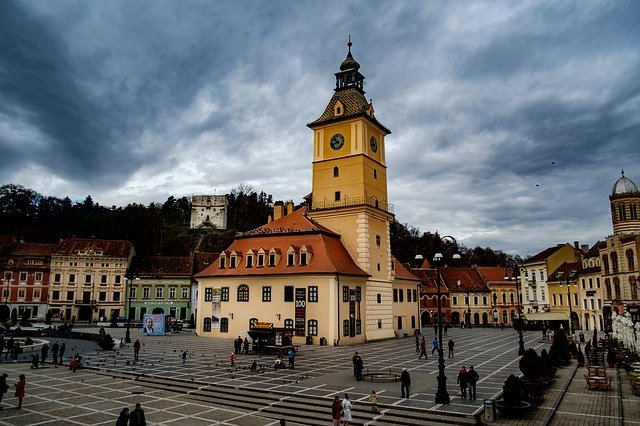